The “Forever Chemicals” are Back in the House

Lost in the daily news coverage of the recent government shutdown was a significant announcement of the creation of a new bipartisan task force in the House of Representatives. On January 23rd, Representatives Dan Kildee (D-Mich.) and Brian Fitzpatrick (R-Pa.) announced that they were to begin working on a drinking water contamination issue caused by a family of fluorinated organic chemicals known as per-and polyfluoroalkyl substances (PFAS). These compounds are often referred in news articles as “forever chemicals”. This is due to their longevity in our bodies and the environment.

There is a chance you’ve heard a little about these chemicals over the past few years. There is a near certainty that you will hear a lot more about them in the future.

What are Forever Chemicals?

The PFAS family includes more than 3,000 man-made chemicals that have been used for decades in consumer and industrial products. They have the unique ability to repel both oil and water and resist heat. These properties make them very useful. PFAS are in hundreds of products, including nonstick coatings on cookware, waterproof and breathable membranes for clothing, carpet and clothing stain repellents, food-grade coating for paper and cardboard packaging, industrial surfactants, and firefighting foams.

Unfortunately, PFAS compounds are toxic even at extremely low levels. They bioaccumulate in our bodies and the bodies of animals, and take a long time to break down in the environment. There is a substantial body of scientific evidence that exposure to PFAS has a wide range of health impacts. These include: links to thyroid and liver diseases; prostate, kidney, and testicular cancers; high cholesterol; changes to the immune system; and birth defects. 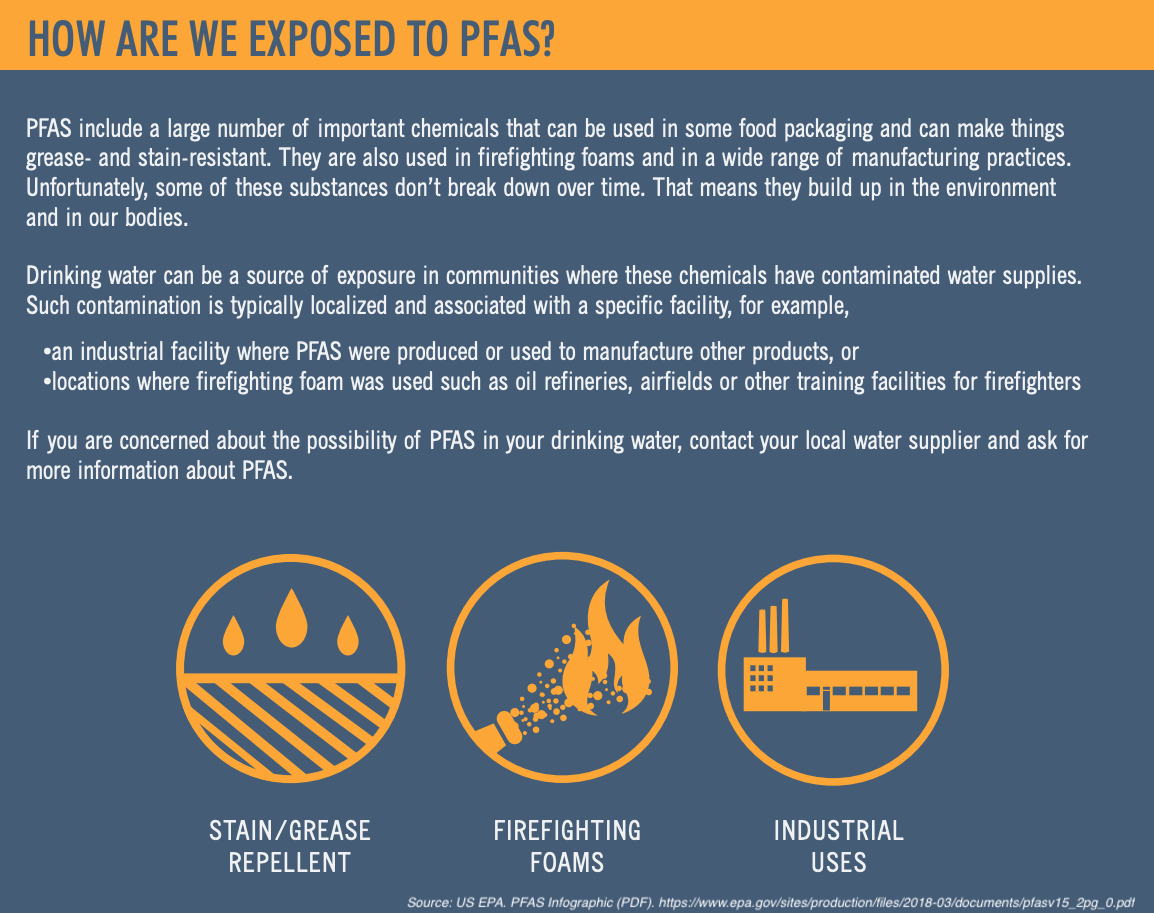 In 2016, the EPA established a drinking water health advisory for two specific PFAS compounds. These are perfluorooctanoic acid (PFOA, also known as C8) and perfluorooctane sulfonate (PFOS). In this action, EPA established the health advisory level for PFOA and PFOS at 70 parts per trillion. EPA’s health advisories provide technical information to states agencies and other public health officials. This enables them to take the appropriate actions to protect their residents. However, these advisories are non-enforceable and non-regulatory.

There have been successful movements by U.S. manufacturers for nearly two decades. They are voluntarily phasing many of the more dangerous “long-chain” PFAS compounds such as PFOA and PFOS out of domestic products. However, their persistence in the environment, long lifespan, legacy in existing products, and continued global manufacture have kept PFAS around. Also, some of the “short-chain” compounds used to replace them may carry some of the same health threats as their long-chain counterparts.

Public awareness of PFAS compounds has increased over the past 15 years as a result of numerous legal cases involving contamination of public and private drinking water supplies. An early landmark case involved contamination of drinking water in Parkersburg, West Virginia by a nearby chemical plant. An initial settlement resulted in a 2005-2006 medical survey of 69,000 people who were exposed to PFAS because of the contamination. The survey linked PFAS exposure to six diseases.

In 2018 a Department of Defense report to Congress disclosing that over 400 military installations were identified as having known or suspected releases of PFAS from firefighting foam into drinking water supplies. Most recently (and ongoing), is the contamination of drinking water from a stretch of the Cape Fear River in North Carolina with short-chain (C6) PFAS. This potentially affects more than a quarter-million people. The compounds in question, namely a HFPO dimer acid and its ammonium salt, have been used for over a decade as a safe replacement for PFOA. However, a recent EPA study has shown that they may cause similar health problems as those associated with PFOA.

Congress has been paying attention. Last August, senators from Michigan and South Dakota introduced two bipartisan bills (S. 3381 and S. 3382) that sought to address the PFAS issue. Both the House and Senate followed up in September with separate subcommittee hearings to discuss the emerging health and environmental impacts of PFAS.

Although the Senate bills last year brought attention to the subject, neither made it past committee stage. However, lawmaker’s efforts continue. In addition to the House task force mentioned at the beginning of this article, on January 14th three Michigan members of the House of Representatives introduced another bipartisan bill – the PFAS Action Act of 2019 (H.R. 535). This bill would push the EPA to list all PFAS as “hazardous substances” under Section 102(a) of the Comprehensive Environmental Response, Compensation, and Liability Act of 1980 (a.k.a., CERCLA or the Superfund law). This would open the door for more rigorous regulation and control of these compounds.

States are taking action as well. In 2017 Michigan created the first multi-agency action team of its kind in the nation to investigate sources and locations of PFAS contamination in the state’s drinking water supplies. That same year, California added PFOA and PFOS to the list of chemicals known to the state to cause reproductive toxicity. Companies doing business in California are now required to provide a warning under Proposition 65 before exposing anyone to the chemicals in any manner, and by this July they will be prohibited from releasing PFOA or PFOS into sources of drinking water.

Until recently, the focus on PFAS has been primarily on their contamination of drinking water supplies and secondarily on their presence in finished consumer goods. However, because of the potential for air deposition of these chemicals from smokestacks and process vents onto soil and ultimately into groundwater, ambient air and stack emissions are also being scrutinized. Several states have recognized the need to address stationary source air emissions of PFAS and are modifying operating permits and developing state-level regulations accordingly. These include Michigan, New Jersey, North Carolina, Washington, and New York, among others. 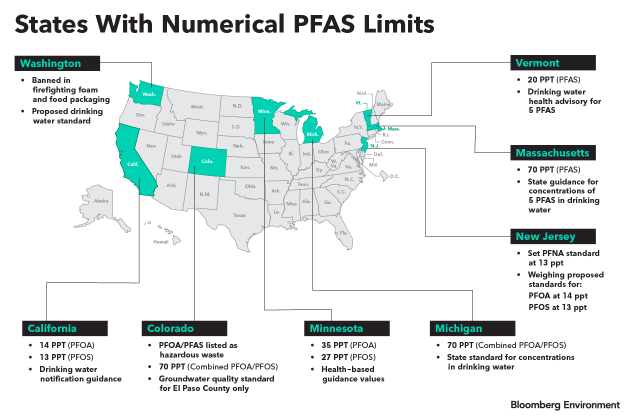 Air emissions of PFAS can be generated from a long list of manufacturing processes. Those for oil/water/stain-resistant fabrics, coated paper packaging, fire retardant materials, coated wire, surfactants, plastics, and semiconductors are the most well-known. Waste incineration, landfilling, and wastewater treatment may represent other potential air sources, although most likely to a lesser extent.

Once airborne, PFAS can remain in a gaseous state or bind with particulate matter or aerosols suspended within the air. Quantifying these air emissions represents a challenge. Existing stack test data are very limited and there currently is no USEPA protocol developed specifically for measuring PFAS in air emissions. Laboratory contamination of samples also presents a challenge, since the PFAS analytes are found in common lab supplies and equipment such as polytetrafluoroethylene (PTFE) products.

Studies have been reported in which either XAD-II resin or polyurethane foam substrates were successfully employed to capture PFAS in air samples. For example, a standard stack sampling method for semi-volatile organic compounds using XAD-II resin, EPA SW-846 Method 0010, was recently used to measure several PFAS compounds in stack emissions from a chemical facility in North Carolina.

Suitable laboratory analytical techniques to quantify PFAS are relatively new (developed in the mid-2000s). The normal detection method uses high-performance liquid chromatography (HPLC) coupled with tandem mass spectrometry (MS/MS). EPA drinking water research method 537.1, which uses HPLC/MS/MS, is the most commonly used, but there are others under development.

Given the potential scope of the PFAS problem and the increased momentum of the conversation in the public dialogue, it is likely that efforts will increase to measure sources of PFAS and understand how to minimize human exposure to these compounds. Stay tuned by reading our sequal: EPA Unveils its Long-Awaited Action Plan for PFAS.