On February 14, 2019, the EPA unveiled the Agency’s first-ever comprehensive nation-wide Action Plan for Per- and Polyfluoroalkyl Substances (PFAS). According to the current EPA Acting Administrator Andrew Wheeler at a news conference in Philadelphia, this is the first time the agency has engaged all of its program offices to deal with an emerging chemical of concern. The plan provides a long list of steps the EPA plans to take over the next several years as it addresses protection of public health from PFAS.

As reported in our blog, The “Forever Chemicals” are Back in the House, earlier this month, PFAS are synthetic chemicals that are found widely in the environment, especially drinking water and soil. There is broad consensus among scientists that these chemicals represent an environmental threat. Exposure to them may lead to adverse health effects. Studies have linked PFAS to a wide range of diseases, including cancer and birth defects. However, questions remain over the mechanisms in which these chemicals cause these health effects and at what levels in the environment do they represent a threat.

Which PFAS Chemicals Are Being Regulated?

Much of EPA’s Action Plan deals with answering these questions and creating a better and more widely communicated understanding of the problem. The Plan contains little in the way of concrete regulatory steps. However, the EPA says it has already initiated the process of listing two specific and prevalent PFAS chemicals – PFOA and PFOS – as hazardous substances under the Superfund law (CERCLA), and Mr. Wheeler stated in the news conference that the Agency is committed to move forward with the Maximum Contaminant Level (MCL) process outlined in the Safe Drinking Water Act for these two chemicals. 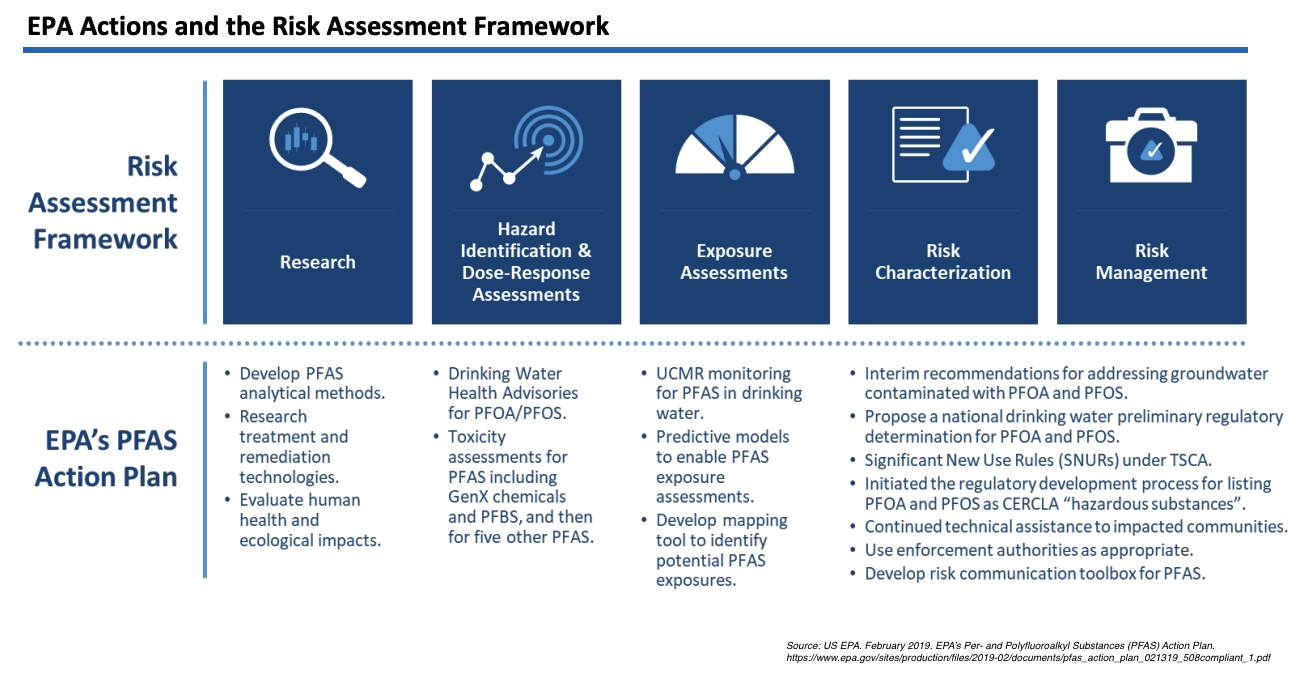 Although much of the Action Plan focuses on the drinking water impacts of PFAS, it does address other media as well. Over the coming years, the Plan indicates the EPA’s intention to expand monitoring and regulatory efforts to other matrices including air: Ambient, Stack emissions, and off-gases. To this end, the Agency plans to develop and validate methods for stack emissions measurements sometime in 2020.

One can anticipate that the starting point for these efforts would be the current coupling of traditional methods for measuring air emissions of semi-volatile organic compounds (e.g., SW-846 Method 0010) with the newest drinking water method for PFAS (Research Method 537.1). However, the Plan indicated that measurement of Total Organic Fluorine may also be considered as a surrogate measurement for PFAS.

Learn more about CleanAir’s many services related to air measurements. Ethylene oxide regulations picking back up after lull?